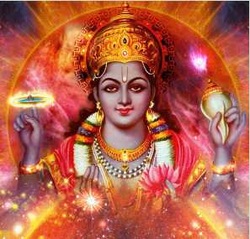 Vishnu's Hidden Gems ~ via Mantra
A Sanskrit Mantra Workshop
- - - - workshop as Personalized Tutorial option - - - -
Best known through the scripture & teachings of Krishna, Rama and The Buddha;  Vishnu represents that  principle which preserves and sustains, as demonstrated by his epic roles in defeating evil, protecting the pious, and restoring Dharma (Divine Law).  The less well known  incarnations of Vishnu provide a wealth of inspiring and very practical teachings.  Sanskrit mantras, and the yogic principles represented in these teachings, offer tools to empower and uplift all aspects of our lives.

Guided by the teachings of Namadeva Acharya (Thomas Ashley-Farrand), this Knowledge & Mantra Immersion Workshop offers instruction and group practice in dozens of mantras that enable participants to gain many benefits from the practical application of these lessor known teachings of Vishnu.
Participants will learn:      Attendees will receive detailed handouts plus a CD of all workshop mantras.
click here to return to Personalized Tutorial page